Finding Meaning in Our Suffering

“I always had this madman inside of me trying to get out, and drink gave him permission.”

He sat alone with a liquor bottle in his hand, his mind numb with alcohol.

The phone suddenly rang, and it was a call from his former partner telling him that she was pregnant with their son. Eric Clapton received the news with some surprise, mostly because he had never imagined himself to be a father. They would soon name their son Conor.

Clapton’s unmatched mastery of the guitar inspired the scrawling of the “Clapton is God” graffiti around London, and landed him as one of the most prominent guitarists of his era, playing in many now legendary acts such as the Yardbirds, Cream, Derek and the Dominoes, and his ever successful solo career. In the years to come he would be the only musician to be inducted into the Rock and Roll Hall of Fame three times, while most musicians would dream to be nominated just once.

As with his massive success, Clapton had a massive appetite for self-destruction. Starting out on a rough road, Clapton was born illegitimate to his 16 year old mother, and never knew his father. This absence of a father figure was without a doubt, a great source of pain in his life.

Just after recovering from his harrowing drug addiction, Clapton was struggling in yet another battle with his alcohol addiction.

When Conor was born, a nervous Clapton held him in his arms and though he didn’t know how to hold a baby, he felt proud of the new phase of life that he was now in.

His habits, however, didn’t die immediately, or easily. As soon as he put Conor in his cot and kissed him goodnight, he would get back to his normal consumption, often drinking until he passed out. His drinking got worse to a point where literally couldn’t live a day without a drink.

One day, cooped up in his hotel room with nothing to think about except for his pain and suffering, he thought to himself, “This has got to stop.” Remembering his growing son, he said, “I really did it for Conor, because I thought no matter what kind of human being I was, I couldn’t stand being around him like that. I couldn’t bear the idea that, as he experienced enough of life to form a picture of me, it would be a picture of the man I was then.”

Then and there, he made the decision to return to treatment.

Giving up his addiction was a searingly difficult goal to strive towards, but it was the fear of letting Conor grow without a father that pulled him through some of his darkest moments.

“I kept coming back to the thought of Conor, the reality of his life and what it required of me, and the horrible possibility that if I didn’t get it right this time, history would probably repeat itself,” he said, “The thought of him going through all that was what finally made the difference. I had to break the chain and give him what I had never really had — a father.”

Clapton knew deep down inside that he was not going to make it on his own — Not without the grace of God. He said, “At that moment, almost of their own accord, my legs gave way and fell to my knees. In the privacy of my room I begged for help. I had no notion who I thought I was talking to, I just knew that I had come to the end of my tether, I had nothing left to fight with. Then I remembered what I had heard about surrender, something I thought I could never do, my pride just wouldn’t allow it, but I knew that on my own I wasn’t going to make it, so I asked for help, and, getting down on my knees, I surrendered.”

As a sober man, he reflected, “I had found a place to turn to, a place I’d always known was there but never really wanted, or needed, to believe in. From that day until this, I have never failed to pray in the morning, on my knees, asking for help, and at night, to express gratitude for my life and, most of all, for my sobriety.”

Then suddenly, just a few years later, his force for change was taken away.

Conor died after tragically falling from the 53rd floor of an apartment in New York. He was only four years old.

Grieving the death of his son, Clapton found the time to be alone with his thoughts. After the funeral, Clapton went through his son’s belongings and found a letter from Conor that he had written for him from Milan, telling him how much he missed him and how badly he could not wait to see him in New York. He had written the words, “I love you”.

“Heartbreaking though it was,” Clapton reflected, “I looked upon it as a positive thing”.

His son’s death could have kicked him back into the spiraling habit of drugs and alcohol, or it could have made him horribly despondent towards life. But instead, he chose to be strong.

He said, “I cannot deny that there was a moment when I did lose faith, and what saved my life was the unconditional love and understanding that I received from my friends and my fellows in the twelve-step program.”

Clapton kept giving support to recovering alcoholics at meetings, showing them the strength that each and every one of them possessed within themselves.

He elaborated, “A woman came up to me after the meeting and said, ‘You’ve just taken away my last excuse to have a drink.’ I asked her what she meant. She said, ‘I’ve always had this little corner of my mind which held the excuse that, if anything were to happen to my kids, then I’d be justified in getting drunk. You’ve shown me that’s not true.’ I was suddenly aware that maybe I had found a way to turn this dreadful tragedy into something positive. I really was in the position to say, ‘Well, if I can go through this and stay sober, then anyone can.’ At that moment I realized that there was no better way of honoring the memory of my son.”

During that period of convalescence, he wrote three songs in tribute of his son — “The Circus Left Town”, about his last night with Conor, when he took him to see the circus. “My Father’s Eyes”, a song in which he linked the loss of Conor with the mystery surrounding his own father. And most famously, “Tears in Heaven”, which he wrote to ask himself the question, “Will we really meet again?”.

Originally, they weren’t meant for publication. In Clapton’s words, “They were just what I did to stop from going mad. I played them to myself, over and over, constantly changing or refining them, until they were part of my being”.

He was then persuaded to publish these songs, as “it might in some way help somebody.” As he performed these songs for the first time for his Unplugged album, he said that  “I had a need to perform these new songs about my son, and I really believed that they were meant to help not just me, but anybody who had or would suffer such extraordinary loss.”

It was indeed, a beautiful way to honor his son.

Art as a Service 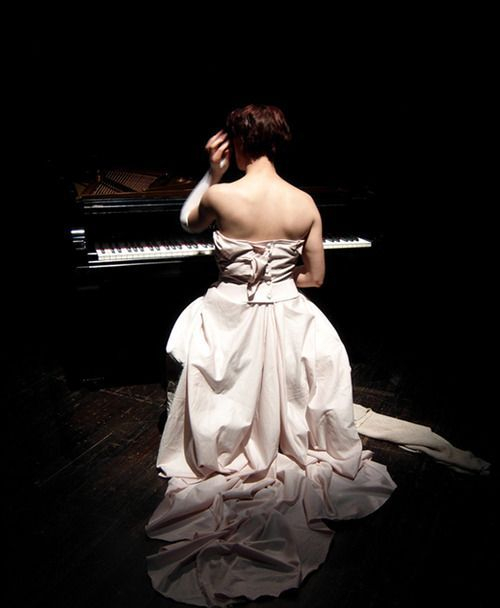 “There Will Be No Intermission” is the latest release by Amanda Palmer. In this record, she nakedly shared stories about themes such as her miscarriage, abortion, cancer, and loss.

They were all frighteningly personal topics to write and sing about, but through her sharing, she was able to touch many lives and in turn, made the album very successful.

As with the record’s release, many listeners would tell her about how connected they felt to her music, how strongly they could relate to her pain. From there, Palmer began to see her art as a service industry.

She had an uncommon metric for the success of her record — She focused on how many people cried when they listened to it. As she explained in her interview on the Tim Ferriss Show, it “is not in numbers or stars granted to me by magazine critics, but this number of human beings crying when they hear it or see me play it, which is a way more satisfying way to judge the worth of a record. And it’s working.”

She elaborated, “I know that I want to write about my pain, but then it was like a magic trick. Then it worked. People crying at my shows, then women were coming up to me and telling me about their pain, their abusive relationships, their rapes, their struggles, and men of all ages, sizes and genders.”

It wasn’t easy to openly sing about her personal struggles, and it definitely wasn’t comfortable. But when she decided to do so, she realized that she wasn’t alone in her suffering. There were many people who bled the same way, who felt that they could better deal with their tragedies after listening to her music. She shared her personal muses to keep herself sane and strong, and her listeners got stronger too. She was doing them a service.

She said, “One of the things about this record is that it actually, it feels like my final exam in songwriting. It’s the most raw, unedited offering from a place of grief, but also empowerment and enlightenment that I could offer up to anyone out there who would need it. In a way, it’s the most medicinal record I’ve ever made, and I know because I needed it. If I needed this medicine, it’s probably going to work on other people, ‘Here, you try it. Is this going to work on you?’ That’s been what it is.”

In Palmer’s view, this is the role that artists must carry on their back, and it is for this role that artists must be protected. She said, “We should be taking care of our artists the way we take care of any other valuable cultural tool. Artists are really fucking necessary for us to make it through this vale of tears. If we don’t take care of them and the art that they make, and the music that they make, we all collectively suffer.”

All of us have our own tragedies in our lives. Everyone you see has his or her own inner battles to fight. Everyone is tested in different ways.

Yes, often times we feel like we’re alone in our pain and suffering. We feel like our tragedies are totally unique, we feel like we aren’t in control of our lives. We grow despondent, we lose hope, our efforts are paralyzed.

Remembering Eric Clapton and Amanda Palmer, we can choose not only how we respond to our suffering, but at a higher level, use our art to be at service to other people, because that’s what makes life a lot more meaningful — When it’s not about ourselves or how much we can get, but how much we can give.

It’s what we all should try our best to accomplish with our art, really. It’s the role of an artist to be at service for other people, and art, after all, isn’t meant for only the artist.