Note : As much as I try to keep my writing profanity-free (as long as it doesn’t compromise the points I’m bringing up), this article does contain some strong language.

“Humor, more than anything else in the human make-up, can afford an aloofness and an ability to rise above any situation, even if only for a few seconds.”

“Joe, a young man from Pittsburg, came up to me with one request : ‘Please tell me it will all be okay.’

‘Welcome to Earth, young man,’ I said. ‘It’s hot in the summer and cold in the winter. It’s round and wet and crowded. At the outside, Joe, you’ve got about a hundred years here. There’s only one rule that I know of : Goddamn it, Joe, you’ve got to be kind!’ ”

Kurt Vonnegut,
A Man Without A Country

Sigmund Freud once pointed out that humor is our almost physiological response to fear or frustration. When we can’t change a situation, a smile or a laugh could help us get through whatever it is that we’re going through.

Accordingly, a common trait among the strong-willed is the ability to laugh at themselves or at the arduous trials that they find themselves in.

The late writer Kurt Vonnegut is perhaps one of the best examples of that. Vonnegut was no stranger to suffering. As a child, he witnessed his family lose their fortune as the Great Depression came about. He later enlisted in the army, and when he was on leave, he lost his mother to suicide. Only months later, he was deployed to foreign waters as World War II erupted. In Dresden, Germany, he was captured as a prisoner of war — The city in which he miraculously survived a ghastly bombing by the Allied forces. When that was over, he was tasked with amassing the burnt and melted German corpses. Later, as he took up the life of a writer, he struggled to fend for his family with an unstable income.

Having walked down a long and difficult road as that, Vonnegut learned to see himself and the world around him in a playful lens. He wrote in one of his essays, “Humor is a way of holding off how awful life can be, to protect yourself.”

In his life and work, his sense of humor always had a vein of wisdom behind it, as he would teach others to be kind, to be there for one another, and to appreciate the current moment, no matter how bleak or mundane it might seem. Especially with the current pandemic, these themes have proven to be vital for our society today.

He often joked with his kids — As he wrote, “Whenever my children complain about the planet to me I say, ‘Shut up! I just got here myself. Who do you think I am – Methuselah?’ … We are all experiencing more or less the same lifetime now.”

And sometimes, even in old age, he would be the one to turn to his kids for wisdom. He once asked his son, “What is life all about?”, to which his son replied, “Father, we are here to help each other get through this thing, whatever it is.”

As his work became renowned around the world, he was often invited to give commencement speeches in universities. He always reminded the graduates that, in spite of our differences, we are all in this together. He said, “Life is going to be very tough again, just as soon as this is over. And the most useful thought we can hold when all hell cuts loose again is that we are not members of different generations, as unlike, as some people would have us believe, as Eskimos and Australian Aborigines…We are all so close to each other in time that we should think of ourselves as brothers and sisters.”

He also loved to share a story of his Uncle Alex, saying, “His principal complaint about other human beings was that they so seldom noticed it when they were happy. So when we were drinking lemonade under an apple tree in the summer, say, and talking lazily about this and that, almost buzzing like honeybees, Uncle Alex would suddenly interrupt the agreeable blather to exclaim, ‘If this isn’t nice, I don’t know what is.’ ”

To graduating class after graduating class, Vonnegut would say, “So I hope you will do the same for the rest of your lives. When things are going sweetly … say out loud, ‘If this isn’t nice, what is?’”

“While we were being bombed in Dresden, sitting in a cellar with our arms over our heads in case the ceiling fell, one soldier said as though he were a duchess in a mansion on a cold and rainy night, ‘I wonder what the poor people are doing tonight.’ Nobody laughed, but we were still all glad he said it. At least we were still alive! He proved it.”

Kurt Vonnegut,
A Man Without a Country

Part of what makes Vonnegut a great writer is how genuine his writing is. In his stories, he doesn’t shy away from speaking in a first-person narrative while he reflects on deeply traumatizing events such as the bombing of Dresden and his mother’s suicide. “Literature should not disappear up its own asshole, so to speak,’ he said, referring to books and their authors. Or, in other more polite words, “I think it can be tremendously refreshing if a creator of literature has something on his mind other than the history of literature so far.”

And of course, another reason his writing is so good is that he understood the power of humor in communicating ideas.

If done well, humor allows the audience to have much clearer realizations and insights, than if the truths were plainly spoken to them. In Vonnegut’s case, his ingenuity as a writer was in his ability to make his audience laugh while he explored very serious issues such as war, mental illness, and death.

As George Saunders wrote on Vonnegut, humor “is what happens when we’re told the truth quicker and more directly than we’re used to. The comic is the truth stripped of the habitual, the cushioning, the easy consolation.”

He also said, “Your real story may have nothing to do with your actual experience…In constructing your black box, feel free to shorthand those experiences, allude to them sideways, or omit them entirely. Joke about them, avoid directly exploiting them, shroud them in an over-story about aliens: you know what you know, and that knowledge will not be shaken out of your stories no matter how breezy or comic or minimalist your mode of expression, or how much you shun mimesis.”

Let’s dip into a couple of Vonnegut’s most famous works : Slaughterhouse Five and Breakfast of Champions.

In Slaughterhouse Five, the story was intended to be his grand recount of Dresden’s bombing. But as he admitted in the book, the event was just so traumatizing and unspeakable, that as years passed, he still didn’t have much to say about it. “You can’t remember pure nonsense,” he said. “It was pure nonsense, the pointless destruction of that city, and, well, I just couldn’t get it right…I kept writing crap, as they say.”

The book’s alternate title is Children’s Crusade, referring to Vonnegut’s remark that he and the other soldiers were just “babies” during the war — Clueless, naive, and inexperienced. It took him 25 years to write the book, in which he interwove the sci-fi thrills of time-traveling and alien abduction.

The experience of war, especially the first-hand anxiety and trauma that come with it — Is definitely not an easy issue to capture in words, at least not in the conventional novelistic approaches. Through his humorous sci-fi ploys, Vonnegut attempts to break out of the trauma of Dresden. But the fact that he fails to do so, is what makes the story so effective. Vonnegut’s humor still doesn’t dare to reenter the blood showers that he experienced, but it exudes a compelling atmosphere that keeps the readers engaged in thought. The greatness of Slaughterhouse Five isn’t found in answering the salient questions of the war, but in the unusual approaches in which it uses humor to leave those questions unanswered.

“(The book) is so short and jumbled and jangled…because there is nothing intelligent to say about a massacre,” Vonnegut wrote in Slaughterhouse Five. “Everybody is supposed to be dead, to never say anything or want anything ever again. Everything is supposed to be very quiet after a massacre, and it always is, except for the birds…And what do the birds say? All there is to say about a massacre, things like ‘Poo-tee-weet?’ ”

Another brilliant book is Breakfast of Champions — Well, brilliant or not is very subjective, as it’s probably Vonnegut’s most divisive work. The book’s structure is incredibly unusual, even for Vonnegut. It doesn’t have a coherent story, it includes totally useless details (like the length of the characters’ penises) and it’s filled with funny drawings like this : 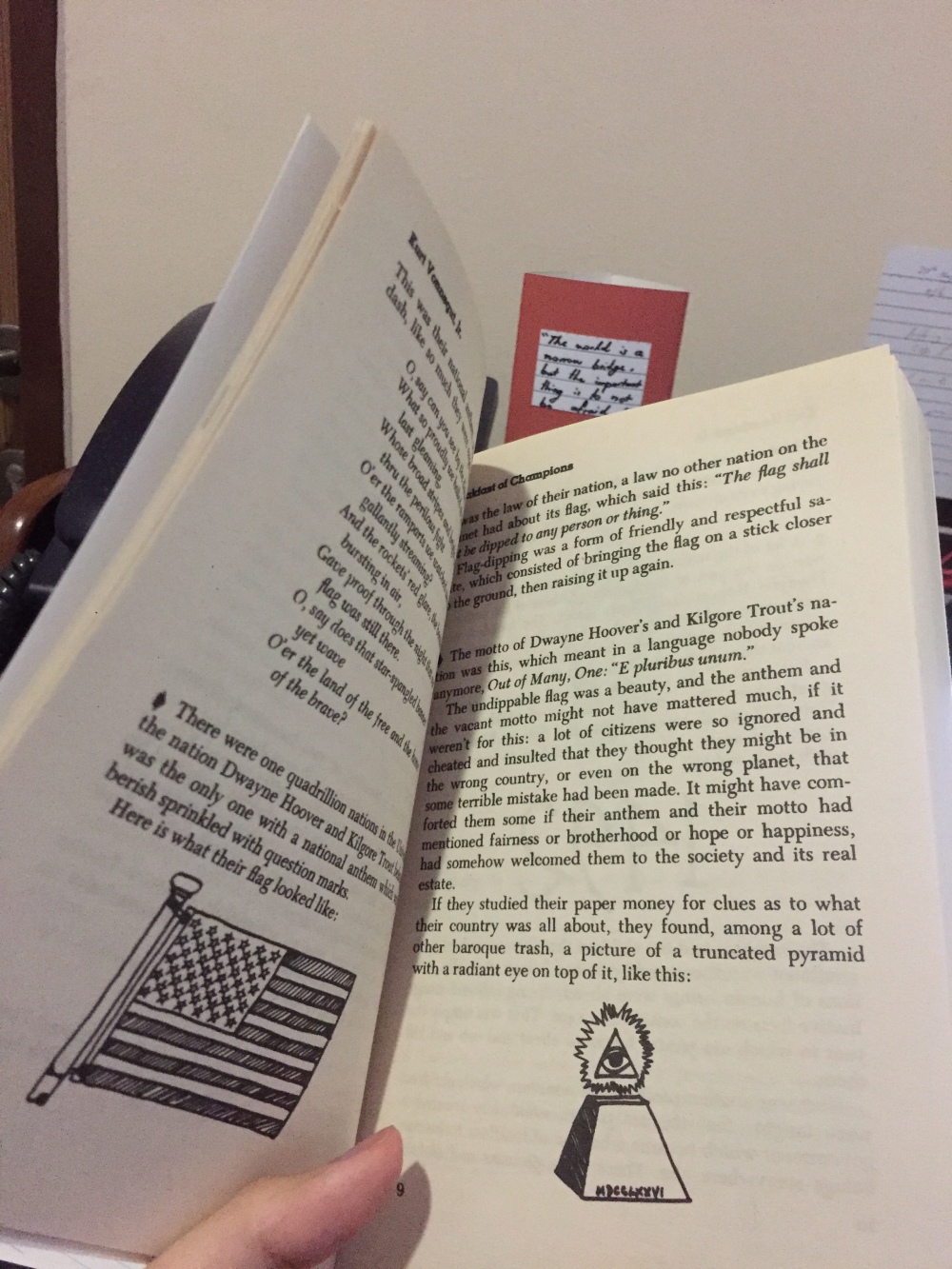 But it can be argued that Breakfast of Champions is Vonnegut’s anti-art novel. With the book’s content and structure, Vonnegut attempts to dethrone art from its pedestal, and to view it in a more objective, albeit cynical light. As he suggests in the novel, a “work of art” often doesn’t mean much for its author — It might be something that he just leisurely worked on — But it’s the audience who find meaning in something that doesn’t have any meaning. Vonnegut’s trying to make us realize that sometimes, we take things too seriously. (In fact, maybe that’s what I’m doing right now by thoroughly analyzing his work)

In the book, Vonnegut shares a story about a cobbler who just happens to paint a picture of his cat. It’s the only painting he’s ever made, but once he brought it to a critic, the painting was put in a “warehouse crammed with works of art”.

He shared another story about another painter named Rabo Karabekian in fictional Midland City who made 50,000 dollars for a painting that looked like this :

For a painting of which “I’ve seen better pictures done by a five year-old”, Vonnegut wrote, “Midland City was outraged. So was I.”

Vonnegut revolts against artists who make their art seem arcane or inaccessible to common minds, when it’s something that they simply made on a leisurely weekend. He wrote in the book, “I had no respect whatsoever for the creative works of either the painter of the novelist. I thought Karabekian with his meaningless pictures had entered into a conspiracy with millionaires to make poor people feel stupid.”

In our real-world where a ridiculous all-white painting was sold for 20.6 million dollars, Vonnegut’s rants in Breakfast of Champions speak volumes.

So that’s really just a gist of how Vonnegut brilliantly wielded humor to make us realize important truths. There are other artists who employ humor in their own unique ways, and I wanted to include some of them here, but I couldn’t find an honest place to do so –Like Oscar Wilde, particularly how he teaches us the title moral lesson in The Importance of Being Earnest by cracking us up about characters who invent personas to escape their obligations and to get whatever they want, and by poking fun at the Victorian society’s noble high class.

Or like musicians such as System of a Down, who use humor and irony to make us realize how dumb war and politics are in their songs.

Oh well, maybe next time. At least I gave you a sneak peek of my next possible article, right?

Anyway, Vonnegut once wrote, “All I really wanted to do was give people the relief of laughing. Humor can be a relief, like an aspirin tablet. If a hundred years from now people are still laughing, I’d certainly be pleased.”

Here I am today, drinking my coffee, laughing and thoroughly enjoying his work. If this isn’t nice, what is?