Keith Richards,
Under the Influence

For a long time, my dream guitar has been a Fender Telecaster, and it’s because Keith Richards from the Rolling Stones plays one.

The Stones. A band that started out around the same time as the Beatles and are still on the go today, doing what they love to do.

I read a YouTube comment the other day and I can never forget it. Someone wrote, “The Stones were already here before I was born. Now I’m retired and they’re still touring.”

For a band that’s been around that long, their image naturally comes with both a legendary and a meme-like air to it. Spend five minutes on the Internet and you’d find remarks like, “Every time you smoke a cigarette, God takes one year away from your life and gives it to Keith Richards”.

Keith, especially, is often immediately thought of as the immortal junkie who has single-handedly done more drugs than anyone else in the world, and is somehow still alive. Or, as Keith himself put it, the guy “with a Jack Daniels in his hand, walking down the road, cursing the fact that the liquor store is closed”. That’s probably why the character Jack Sparrow in The Pirates of the Caribbean is literally based on Keith.

But really, the world needs to know more about how fluent a guitar player Keith truly is.

Personally, it’s always fun to watch Keith’s performances. He always smiles and looks like he’s having the time of his life. His playing is buttery-smooth too, as if his fingers roam and wander freely across the fretboard. It’s almost deceiving, because he makes it look so easy — when in reality, it’s the fruit of decades of being intimately acquainted with the craft — like a London cabbie who has taken the infamous The Knowledge exam, and intuitively knows every single street, every route, and every in-and-out of the city without reserve.

I think a lot about music, and every time I listen to the Stones, I never fail to appreciate how intricate and innovative their tunes are, especially from the lens of Keith’s guitar work. I keep learning new things as I challenge myself to listen a little more closely.

So here are a few lessons that I’ve picked up from Keith Richards.

Absorb as Much Knowledge as You Can

Keith’s journey with the guitar began with his grandfather, Gus, a musical gaffer who believed that everybody could be a musician if only they had the right exposure. Gus would deliberately place instruments around his home to see if they caught Keith’s eye. Sure enough, Keith had his eye on a classical Spanish guitar that hung on the wall.

Keith could pick up and play the guitar anytime, only if he learned a traditional Spanish song called Malagueña — until then, he was allowed to play by invitation only. “Play Malagueña, you can play anything,” Gus told him.

According to Gus, Malagueña was the best exercise for beginners because it had a lot of rudimentary moves. From practicing it, “you’re expanding yourself without even knowing,” as Keith would later reflect.

Once he earned the guitar, he was inseparable from it. “People describe me then as oblivious to my surroundings,” said Keith. “I’d sit in a corner of a room when a party was going on or a family gathering, and be playing…I was never parted from my guitar. I took it everywhere and I went to sleep with my arm laid across it.”

As years went by, Keith became more fluent in playing Malagueña, and he was gradually able to infuse his own innovations into the song. One time, Keith played an improvised version of the song for Gus, to which he responded, “That’s not how it goes!”. But Keith insisted, “No, but Granddad, it’s how it could go.”

Unsurprisingly, the same sense of hunger to learn was the very backbone of the Stones. Their story began with Keith and the singer, Mick Jagger, who both simply loved to exchange records and deconstruct them. Keith would figure out the songs on the guitar, and Mick would dissect the lyrics.

As Keith remarked, “You were supposed to spend all your waking hours studying Jimmy Reed, Muddy Waters, Little Walter, Howlin’ Wolf, Robert Johnson. That was your gig. Every other moment taken away from it was a sin. It was that kind of atmosphere, that kind of attitude that we lived with.”

When the Stones finally became a complete ensemble, they were simply a cover band with the sole intention of introducing American blues and rock and roll to the British audience. This went on for years until the band’s manager famously locked Keith and Mick in a kitchen to write their first song. They came up with a song called “As Tears Go By”, and their creative journey has stepped on no brakes since.

Whatever our craft may be, it’s essential for us to be incredibly grounded in the details — because from that, we could develop the tenacity to innovate. There is no other way. No shortcuts.

There can be no breaking of rules before we first thoroughly understand them. Anything other than that is just arrogance.

Make the Most of What You Have

The difference in an artist isn’t in her resources, but in her resourcefulness. An artist doesn’t wait for perfect circumstances, but simply makes the most of what she has. She creates without a sense of competition either, as she puts to work whatever ideas that she might have in her own mind.

It’s not about what you have, but how you use it.

Many of the Stones’ best-known songs are hallmarks of Keith’s resourcefulness. The unforgettably dark and foreboding theme in Gimme Shelter that timelessly reflected the Vietnam War actually started on an unrelated note. “It was a shitty day. I had nothing better to do,” said Keith. “I had been sitting by the window of my friend Robert Fraser’s apartment on Mount Street in London with an acoustic guitar when suddenly the sky went completely black and an incredible monsoon came down. It was just people running about looking for shelter – that was the germ of the idea.”

Out of the feeling of impending doom, Keith suddenly wrote the starting line, “Ooh a storm is threatening my life today”. After passing on the song to Mick, the song was further developed into becoming a commentary on the Vietnam War, with the storm being a potent analogy for the state of their world at the time.

When it comes to Sympathy for the Devil, the song was originally meant to be a Bob Dylan-esque acoustic ballad that Mick had come up with. Yet, Keith was confident in making the most of its potential. He kept insisting that “this song could take a little more juice”. Over 30-something takes, the song was developed into a samba instead, with its tempo radically sped up, percussions such as congas and maracas added in — and of course, the iconic “woo woo” chants blended into the background.

Oh, and if you listen to Street Fighting Man, you might notice the muddy guitar tone that starts the song. Amazingly, Keith didn’t use any special effects to achieve that sound. Rather, he did it by playing his acoustic guitar really loudly in front of a portable cassette player, and then recording with a studio microphone as the cassette tape was playing. You could say that he used a cassette player as a guitar pickup.

Play From the Heart and Have Fun 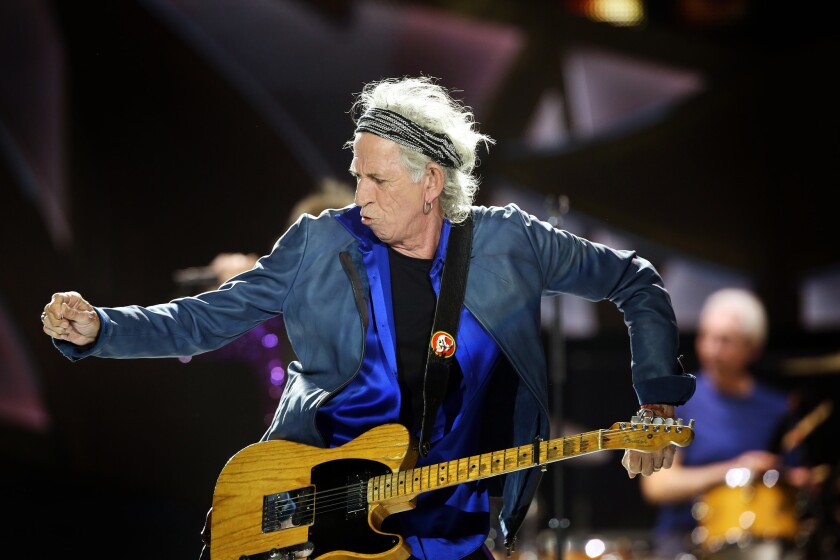 Like most other well-known musicians, Keith Richards couldn’t read a note of music. He learned everything he knew about music from listening to records and attempting to replicate them on the guitar.

He wrote, “Being able to replay something immediately without all that terrible stricture of written music, the prison of those bars, those five lines. Being able to hear recorded music freed up loads of musicians that couldn’t necessarily afford to learn to read or write music, like me.”

And that’s the reason why Keith’s playing style has that natural and smooth flow to it. It’s always refreshing to listen to, because it’s akin to communicating with another person, only in musical terms.

Now, I’m not saying that we should totally disregard formalities in our lives. I’m just saying that sometimes, we can get so lost in them that we just forget to have fun in whatever we’re doing.

As Keith wrote about playing in a band, “There’s something beautifully friendly and elevating about a bunch of guys playing music together. This wonderful little world that is unassailable…And nobody conducting, it’s all up to you. It’s really jazz — that’s the big secret. Rock and roll ain’t nothing but jazz with a hard backbeat.”

As a musician, Keith is always careful to not turn his music into a chore or a job. When writing songs, he has maintained that they “should come from the heart”, and that he has never had to get to a point of saying, “I’m now going to write a song”.

And when playing the songs live, Keith and the Stones aren’t afraid to experiment with different variations if they feel that the songs are becoming mechanical or stale. As Keith said, “When Jumpin’ Jack Flash comes up again it’s never a repetition, always a variation. Always, I would never play a song again once I thought it was dead.”

So if you’re ever stressed about your craft, or if you feel that it’s turning into a demanding job, remind yourself of the times — perhaps when you were younger — when you were just doing it out of your love for it. Because you can decide at this moment, to enjoy your craft and just live a little.

I was reminded of the term “jazzing” from the movie Soul, which means enjoying and going about life without overthinking or being too serious. It means striking a spontaneous heart-to-heart conversation with another person. It means doing something nice for yourself every now and then, just because you’re alive. Because real joy is in the process, in the living.

In life, we might not always know where we’re headed. But we can always choose to enjoy the journey — wherever we find ourselves in.

“For me, music is like the center of everything,” said Keith. “It’s something that binds people together through centuries, through millenia. It’s indefinable. And nobody’s ever going to have the answer to it, but it’s great fun exploring.”

To truly understand what I’m talking about, you just have to listen. That’s where the real experience is. So ladies and gentlemen, here’s Jumpin’ Jack Flash, live at Copacabana Beach: