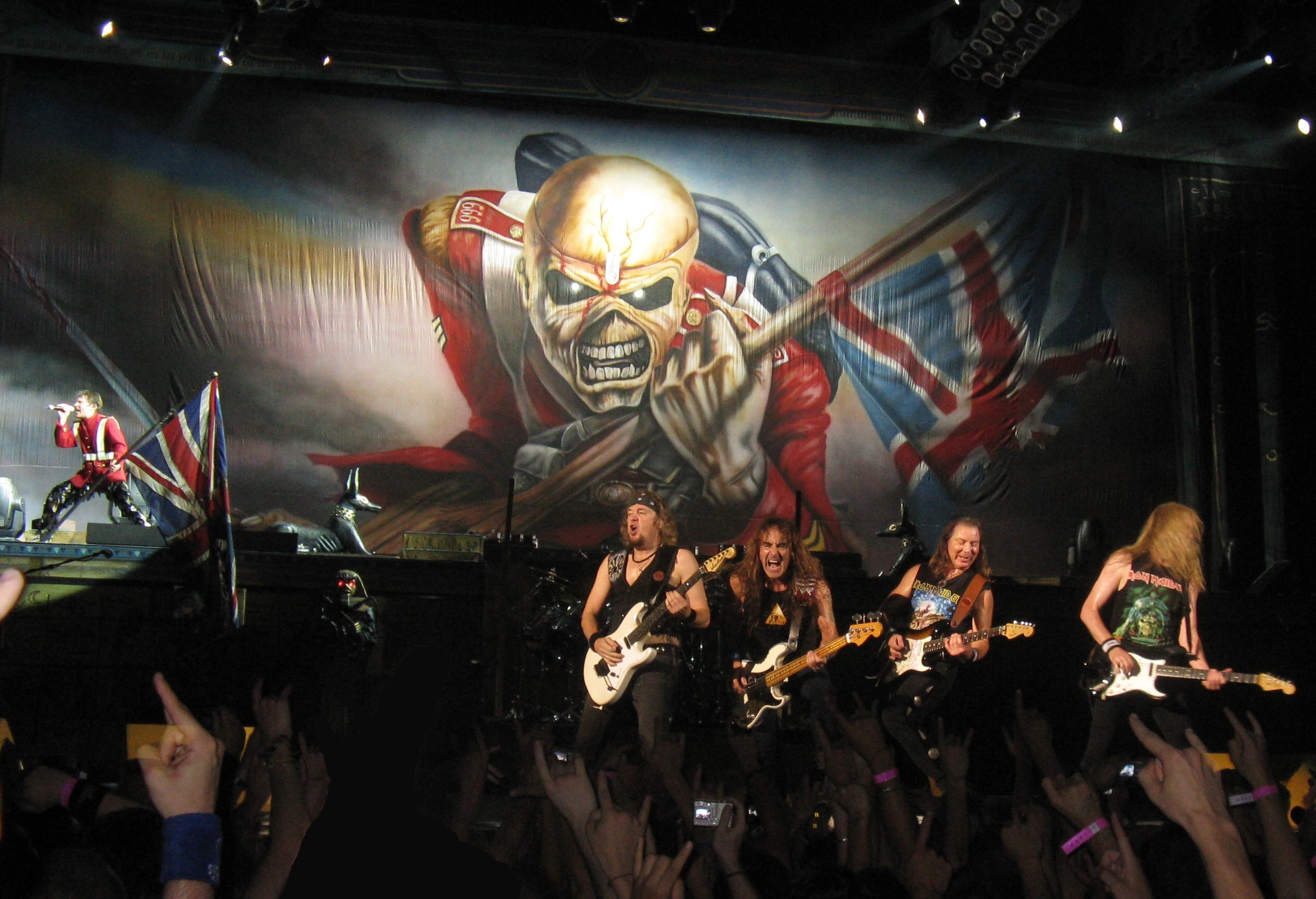 A common fallacy among artists is that marketing should be the least of their concerns, and ought to be left to the men in suits. It’s untrue because first: nobody else knows your work better than you do, and second: this belief is really based on the unsubstantiated fear of “selling out”.

To underline how essential marketing is to any artist, ask yourself, would you be content if nobody knew about your work? As author Chuck Klosterman put it, “Even the most pretentious and elitist artist would not be satisfied if no one saw what they were making — if he was, he’d sit in a dark room and imagine he wrote it already.”

The English heavy metal band Iron Maiden is one of the hallmark models of when consummate craftsmanship meets brilliant marketing. As their business-minded singer Bruce Dickinson said, “I think we’re a brilliant band. I think we are a brilliant brand as well.”

Do they worry about selling out? Of course they do. To them, being a brand is about connecting with their audience and having fun, too. It’s only wrong if it becomes only about the money. “It doesn’t matter if you don’t want to buy an Iron Maiden t-shirt.” said Dickinson. “The music is the most important thing. Everything else comes around that.”

“(There’s) nothing bad about being a brand,” he added. “The only bad thing about being a brand is when people try and exploit it in a way that is not with any integrity…We don’t need to do terrible things with our brand. We want to do nice things that have integrity and are fun.”

If anyone accuses you for selling out just because you’re doing quite well for yourself, tell them what Jason Newsted from Metallica told their haters: “Yes, we sell out…Every seat in the house, every time we play, anywhere we play.”

Here are the marketing lessons I’ve learned as an Iron Maiden fan.

When I was growing up, like most other kids — my parents used to shun my musical preferences. Heavy music was what they called lagu orang gila (crazy people’s music).

It never ceases to amaze me, how bands like Iron Maiden get little to no radio airplay, are not for generic ears, and yet, they’ve managed to survive — so darn well, that is — and are still kicking since the 1970s. With over 90 million albums sold worldwide and over 2,000 shows played in 63 countries, how did they get this far?

The answer is that they focus on cultivating fans, instead of customers. Dickinson said, “What’s the definition of a customer? A customer is a person who can walk away. We don’t want customers. We want fans.”

Fans, on the other hand, are those who are crazy about your brand. They know every lyric of your songs. They own all of your albums. They have that much love and trust for your brand that they pre-order your upcoming work.

With fans, there is a relationship going on, rather than a mere transaction. Take the utmost care for your fans, because they are the most valuable advocates for your brand. The more they are well-cared for, they more likely they are to share your work with their friends. And that makes all the difference — to turn non-believers into believers.

Iron Maiden has always focused on giving the highest value for their fans’ money. In their performances, they focus on the little things like actually memorizing their lyrics instead of using an autocue. In terms of merchandise, they have put out a lot of exclusive work just for the fans, like their very own Iron Maiden video games, comic books, figurines and pinball machines.

Also, being as successful as they are, they could have easily rested on their laurels and do revival tours playing their old hits. After all, they make a lot more money from touring than producing new music. But as band with integrity, they never stop writing new material and playing them live for their fans.

Stay True To Your USPs

A unique selling proposition (USP) is a marketing term for what makes your brand special. It’s what convinces people to choose you over your competitors.

To put it simply, your USPs are the very soul of your brand. With that being said, I’d even argue that among other things, selling out is what happens when you abandon your USPs, in favor of imitating other successful brands with the hope of making lots of money out of it.

Don’t get me wrong. It’s totally fine to look towards others for inspiration, but do it gracefully. Don’t just shamelessly imitate what they’re doing. Take only certain aspects that make the most sense to your brand, and be creative in how you can breathe your own voice into them. Only then it would be a tribute, not a rip off.

Some of Iron Maiden’s USPs include their timelessly-themed songs that are based on history, literature, mythology and folklore, as well as film. They are also unique for their “galloping” rhythm and dual lead guitars in their music.

Throughout their 17 and counting albums, they have experimented and taken inspiration from many different soundscapes, concepts, and cultures. But they have always done so in a way that honors the core of their music, which their fans are absolutely crazy about. And this has played a vital role in their longevity as a brand.

As Bruce Dickinson remarked, “The key is to reinvent yourself, but within your own terms of reference.”

Another huge part of Iron Maiden’s strength as a brand is their consistent image. They are represented by their trademark mascot, Eddie, whose image is used on their album covers and merchandise.

A compelling visual identity, in itself, is marketing for your brand. If used effectively and consistently, it can elicit an immediately recognizable quality in your brand, and therefore help you achieve top-of-mind-awareness amongst your audience.

Think about it. As Seth Godin said about the Volkswagen Beetle, “Every time the very round Beetle drove down a street filled with boxy SUVs, it was marketing itself.”

Also, why does Apple only sell their earpods in white? So that when you see someone wearing them, you’d immediately know those are Apple earpods. The more you see people wearing them, the more they stay in your head. So when you need a new pair of headphones, you can’t help but think of Apple earpods.

In a similar vein, Iron Maiden’s Eddie is iconic. You’d immediately recognize him, even if you’ve never listened to Iron Maiden. Eddie has appeared in many different variations throughout the years: as a cyborg, an alien, a pharaoh, and most recently in their upcoming album Senjutsu, as a samurai.

If you haven’t seen Eddie enough in Iron Maiden’s album covers, the band members love to wear Iron Maiden t-shirts when they perform live. Not to mention, Iron Maiden flies their own Boeing 747 for their tours, which is piloted by Bruce Dickinson himself, and of course, has Eddie and Iron Maiden motifs painted on it.

The saying “Don’t judge a book by its cover” is a load of crap. Figuratively or not, people do judge books by their covers — and that’s why they have covers. How you present yourself and your art does matter.

It’s well-known that a meal doesn’t taste as delicious if it’s not visually appetizing. It’s not enough that your content is good. You need to make it look good as well.

The thing about Iron Maiden is that they brand themselves as not merely musicians, but storytellers. The songs are essentially stories, and onstage is when the songs truly come alive. For that reason, they put a lot of thought into how they present their songs live.

Iron Maiden concerts are like the theater, adorned with stage art, props and epic, dramatic effects and lighting. They love to set the tone for their stories by playing recordings of speeches and quotations from literature.

Aces High, for example, tells the story of a British Royal Air Force pilot fighting in the Battle of Britain, and it is always started with Winston Churchill’s famous speech “We Shall Fight on the Beaches”. Dance of Death always begins with the quotation of a line from Shakespeare’s Hamlet, “There are more things in Heaven and Earth, than are dreamt of in your philosophy” — setting the stage for a story about a man’s encounter with otherworldly creatures.

Bruce Dickinson loves to get specially dressed up for the stories. Most notably, during The Trooper, which is a song inspired by Alfred Tennyson’s poem The Charge of the Light Brigade, Dickinson would dress up as a red coat soldier and carry the Union Jack flag as he belts out his lines.

They place the same emphasis on details when it comes to their album art as well. For their Mayan-themed album Book of Souls, they even went as far as consulting a Mayanist scholar to be sure that their album art was culturally accurate.